It is with deep regret that the death of drummer Dirk van Gansbeke was announced after a car accident on the night of Friday 8 October 1999.  Dirk's wife Carine Vermeulen was very badly hurt in the accident and died after 3 month's in coma.  All our sympathies and thoughts are extended to Dirk's young daughter, Ramona, age of 13.  I had the privilege of seeing Dirk play two excellent gigs with Kevin Ayers this summer - he was a warm and friendly character with a roguish twinkle in his eye - on stage a powerful, consummate professional who poured love into his playing.  I asked him how he was enjoying playing with Kevin and he let me into his secret - the band had a motto that went 'God beschikt maar, Kevin beslist' which he said means 'God divides but Kevin decides'.  I knew what he meant and will never forget the delight in his laughter that followed.  The band have been together as brothers and family for years and will be devastated by this cruel tragedy.  Patriek De Neve had played bass with Dirk in different bands for 15 years and knew him also as a talented songwriter and gifted musician.  The band's work with Kevin this summer was rapidly becoming special and beginning to acquire that magical, transcendental spiritual quality which is lifeblood, root and heartbeat to our whole musical community.  Dirk shared that passion and we can only hope the band recovers the strenght to continue and make their music the finest memorial that Dirk could have. (Martin Wakeling) 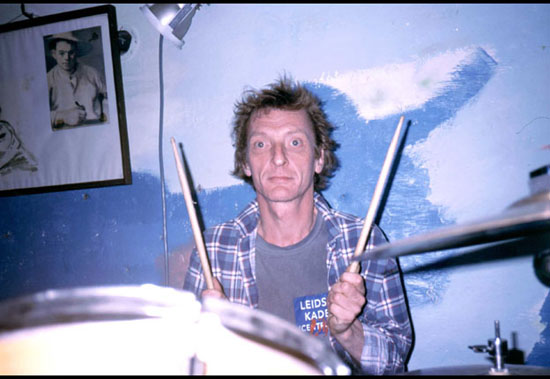